Never in a million years I would think John Krasinski of all the people stars and direct a horror movie. And yet, here it is. Ever since A Quiet Place made its debut in this year’s SXSW Film Festival, the movie has been receiving universal acclaims. I mean, who could have thought that John Krasinski of TV’s The Office and star of 13 Hours: The Secret Soldiers of Benghazi manages to pull this off? Of course, this is not the first time he directed a movie. However, his previous two directorial efforts — Brief Interviews with Hideous Men (2009) and The Hollars (2016) — were largely unknown (and unseen) independent comedy-dramas that flew under the radar.

As for the story, it was as barebone as it goes: A family (among them are John Krasinski and Emily Blunt) must live in silence to avoid attack from the alien creatures sensitive to sound.

Krasinski’s first foray into the horror genre is neither an amateurish nor sloppy piece of work. In fact, he directs the movie like a seasoned pro who clearly knows the genre like the back of his hand. The premise itself is a simple setup. It’s basically about a family trying to survive in the post-apocalyptic world where silence is golden. Because if anyone makes a noise, the alien creature will immediately hunt the victim down. That’s pretty much in Bryan Woods, Scott Beck and John Krasinski’s bare-bones screenplay. Even the dialogues are reduced to a bare minimum as the movie emphasises more on whispers and sign language.

By making good use of the stripped-down premise, Krasinski gets more technical in his minimalist filmmaking approach. Right from the opening moment, he gets straight down to business with a well-crafted sequence set in an abandoned small-town convenience store. I like the way Krasinski quickly established the family surviving in the dreadful post-apocalyptic world. He does so without relying on exposition. Like why is it matters that silence is the key to survival. Or why the alien creature is the cause of the humanity’s downfall. Instead, he focuses on the action itself. Here, it’s hard not to get twitchy seeing the family trying to make every move as quietly as possible. Every single moment counts because you know that the tension will boil and the stake will raise, especially if one of the family members end up making a mistake of causing any obvious sound or noises.

The movie gets better from there, particularly in the second act involving Emily Blunt’s character all alone in the house. It was easily the most gripping set-piece in the movie as we witness how she tries to endure her injury and not screaming for pain. It’s almost like watching an alternate cut of Ridley Scott’s first Alien movie minus the space setting. Like that 1979 seminal classic, Krasinski creates tension by building it up slowly and gradually escalates to a breaking point. Then, there’s the creature design. Despite the movie’s low-budget production, I’m surprised to see the alien creature is well-realised. 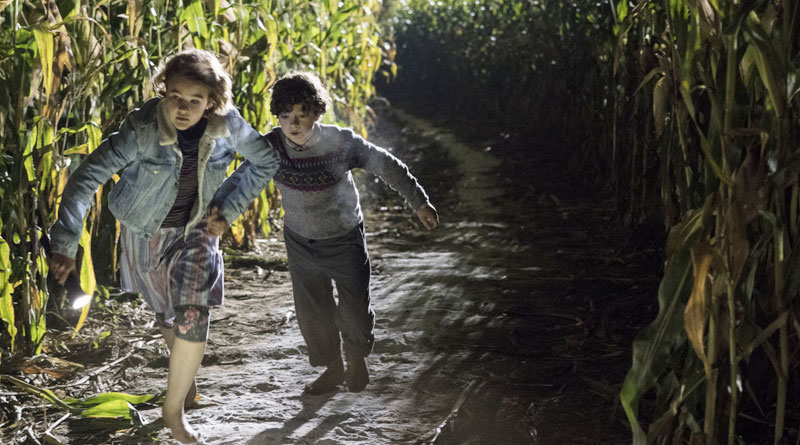 Apart from its technical triumph in visual storytelling, A Quiet Place also benefits from a strong cast led by John Krasinski and Emily Blunt (both of them are real-life married couples). The young cast, which includes Millicent Simmonds and Noah Jupe, are equally praiseworthy.

If there’s any flaw in this movie, I would say Marco Beltrami’s score can be overly intrusive at times. It could have been better if the score doesn’t get too obvious and allow the power of silence creeps up on the viewers instead.